How your catch returns help us help you

For the past three years we have been asking anglers to fill in catch return books at either end of our Gargrave/Inghey stretch of the Aire,the following is an analysis of the data from those returns. It shows that we are starting to build up a picture of the fish stocks on the river but it is early days yet, we need more years data to understand trends.

This is partly why we have introduced the online catch return system, it will help us to gather more information not only for the Gargrave beat but for our other game fisheries. Obviously it will only be of use if anglers report their catches, and also their blanks (blanks are just as revealing as the brace of six pounders!). So we urge you to get online after a session on any of our game waters and report your results.

You can reach the Catch Return page from the members page of the website.

Read on to find out about the health of the Gargrave fishery.

Catch returns on the BCAA Gargrave beat were initiated for us to better understand the population dynamics of our wild fish populations. The return form via books at each end of the beat asked for some rudimentary data: date, and numbers of trout and grayling caught in various size categories (bins). The returns were not mandatory but give us some insight for very little effort.

Obviously, there are caveats to what we can interpret from the data. For example, not everyone was reporting (or perhaps reporting consistently). Not everyone recorded blanks (which are equally important if we wish to represent catch per unit effort). Largest and smallest fish tend to be under-reported. Habits vary – some anglers may fish a more productive method in one season as compared to another, or the balance of more experienced to more novice anglers may vary. A global pandemic may affect which months can be fished! Accepting the plethora of limitations, patterns can still be deduced and of course the more data we can collect over greater time-scales, the better.

The table below summarises some of the data from 2019-2021: percentages of fish caught from within each size bin; total (Σ) fish caught; and average CPUE (catch per unit effort – here, number of fish relative to anglers per day)

Let’s look at the totals and CPUE first, and let’s be fair too. 2019 was the last ‘normal’ season ‘pre-covid’. However, it was also our first year of data collection, so reporting was inconsistent as people learned about the system and we know that blanks were not being recorded by many people.

Hence, CPUE was high in 2019 relative to the later years. CPUE in 20 & 21 were more consistent and certainly in line with other comparable rivers. Total number of trout took a hit in 2020 but don’t forget we couldn’t fish for the first couple of months, and I for one tend to concentrate my trout fishing on the Aire toward that period – think LDOs. Again, personally, I thought my 2020 trout season on the Aire was pretty dire compared to 2019 even, but overall numbers were up and CPUE indistinguishable.

Most people will look to trends against time but again, let’s keep this in perspective: trends derived from 3 years of data (with the noted limitations) are not really worth discussing yet. We need to keep an open mind re production and life-cycles of wild fish and only after 5 years should we be looking at trends over time.

So, what do the percentages in each size bin tell us? Theoretically, a wild population should have a large proportion of the population in the smallest bin (lots of juveniles) and then exponentially decreasing numbers of older fish. Our data suggest that for both trout & grayling, the smaller components of the population are a tad ‘flat’. I noted above that the smallest fish (<1y or ~2-3”) are under-represented by angling catch. Even so, we might expect double the number of <8” compared to 8-10” fish.

Why might our numbers of littl’uns be low? Weather conditions during spawning and habitat are where we should look first and here, I am focussing on trout.

18/19 & 19/20 winters were poor years for recruitment to the trout population, but 20/21 was much better in terms of spawning success (supported by e-fishing data from across the N / NW in summer 21). Since 2015, I think we have experienced 3 ‘highest-ever’ flood peaks on the Aire and we have certainly lost the majority of Ranunculus (water crowfoot) from around the Gargrave beat which provided all sorts of benefits. To counter that, great strides have been made by the club to improve the habitat especially around bits of the riparian zone and the benefits from those will slowly be felt as they mature.

As with anything ecological, it’s complex! But without any data, we would not have a clue.

A new catch return reporting system has been rolled out across all our ‘game’ waters via the new website, you now have the facility to contribute online. Please do so, we have made it as simple and quick as possible. It’s a small way for you to help the club improve our fisheries. 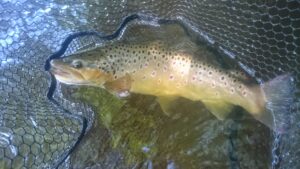